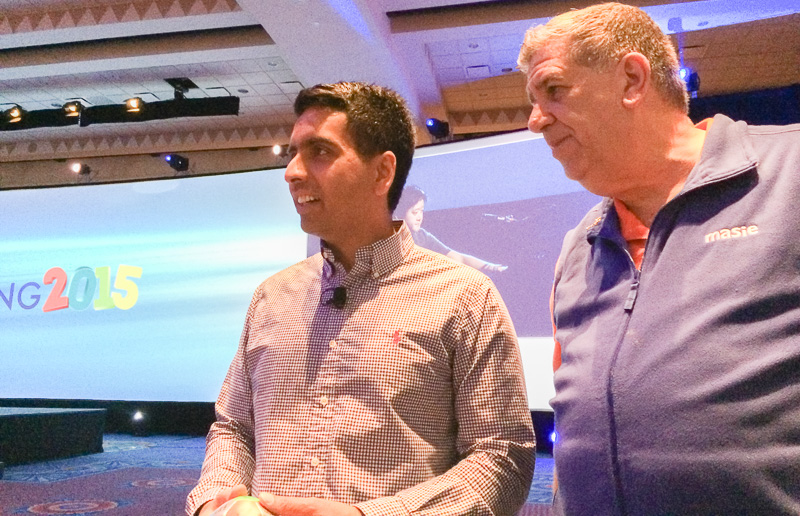 You know it’s a great conversation with Sal Khan when you forget to ask for a picture together. (with Elliot Masie)

I was very fortunate to be able to attend Learning 2015 this year.  For those to don’t know, it’s a 3 day conference of Learning Professionals in Orlando.  It’s generally around Halloween, and is hosted by Elliot Masie.  I hadn’t been able to get down there since 2009, but the gap in attendance provided some interesting perspective on what has changed (and what hasn’t) in the past 6 years.  There is a lot to discuss, so I’ll be writing multiple posts, but in this first of the series let’s focus on the top 5 things that I took away from the conference.

Neuroscience and it’s role in Learning.

This was one of the most exciting things about this conference, and I wasn’t the only one who was jazzed to see it.  All of the Neuroscience related sessions were overflowing with folks being turned away.  PET (Positron Emission Tomography) Scanners and fMRI (Functional Magnetic Resonance Imaging) technologies allow us to map the efforts of the brain in real-time and provide a window into the processes of learning, both in children and adults.  It has let us measure the impact of emotional engagement on learning and helped define why storytelling is so effective as a learning tool.   It has help quantify the importance of reflection, particularly in adults, when learning new material.  Also the importance of challenge, and the need to work through material rather than having it spoon fed to you.  I’ll be writing more on the importance of neuroscience in future posts.  It’s an incredibly fascinating field, and I’m quite lucky to have a couple of clients who are working on cutting edge research.

Or more accurately,  the Scientific Method.  A welcome consequence of the influx of new Neuroscience findings (together with data derived from metric and multi-study meta analysis) is a growing awareness of the importance of drawing conclusions from evidence based research.   This is critical in the face of so many myths around Learning that are taken as fact, simply because they have been repeated so often.   Chestnuts such as “You can’t teach an old dog a new trick” become comically outdated when presented with new research clearly demonstrating the brain’s plasticity and it’s innate ability to adapt and grow based on the challenges it faces.  Other new studies are showing that as the population ages, the role of life long learning will become even more important as a way of creating new neural pathways in the aging brain and improving function throughout your life course.

This will be tough to describe, and I’ll need to give some context as to why this was so unbelievably awesome. If you’ve ever attended a Learning 20XX conference, you will come to know a couple of things about it’s host, Elliot Masie; such as his love of song and dance numbers.  So much so,  that he has begun to produce Broadway plays.  (I’ve worked on Broadway musicals in the past, so I’ve got a pretty good understanding of what that really entails, and I don’t recall it being as glamorous as he has portrayed it. 🙂 ) But suffice it to say that no Learning 20XX conference is complete without a couple of singers singing and dancers dancing.  The response I hear from others in the audience is varied, not because he doesn’t have really talented people up there; on the contrary, the folks that grace the Learning stage are really very good.  Rather, the issue is that the entertainers occasionally get more stage time then the Keynote speakers.   Other audience members loovvve it, taking pictures or recording videos.  That being said, when Elliot introduced the Maestro accompanied by the Orlando Philharmonic Orchestra, I was a bit skeptical.  We had just finished one singing number, and now this…  The conductor took the stage and the Orchestra filed in, seated among members of the audience.  I tried to keep an open mind… The Maestro made it clear that nothing that would be occurring was staged.  That he and the orchestra had only just met and rehearsed a single piece of music.  He then began to move through a series of exercises that vividly demonstrated:

At the end, the audience was invited to get out of their seat (from behind the musicians) and experience the orchestra from anywhere is the hall.  It was incredibly moving to see and hear the performance from the vantage point of the conductor.  Really an amazing way to demonstrate the impact a leadership style has.  It’s hard to get a real sense of the event, so to get a deeper understanding of the session, have a look at his TEDtalk.

There were a number of really strong keynote speakers at Learning 2015, and this is generally the case.  I saw Malcolm Gladwell speak for over an hour at a previous Learning and I could have listened to him all day long, he was just that compelling.  This year there were sessions with Steve Wozniak, and Beverly Kaye.  All of them with the exception of Woz and Sal Khan, also hosted panels and taught other sessions which was an excellent way to take a deeper dive into the topics raised during the keynotes.  I highlighted three presenters because they really stood out… Nigel Paine is just a force of nature.  He is entirely captivating when he speaks and his passion on the subject of Learning is palpable.  He has been leading the charge to look at evidence based neuroscience to help increase the impact of education, particularly when the goal is to change behaviors within the student.  He, as well as Sal Kahn really embody the idea of giving and sharing their knowledge in an effort to create positive change.  I attended an author’s talk that Nigel gave, (he wrote The Learning Challenge) and he basically gave away the guts of the book to the attendees who were furiously taking notes. Sal Khan spoke on the beginning of the Khan Academy and his dream of a free education for anyone that wants one.  I had the 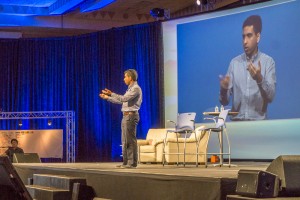 opportunity to speak with him before he went onstage and really enjoyed his perspective on the differences between K-12 and adult learning.  I taught as an adjunct at MICA (Maryland Institute College of Art) for 12 years in the Continuing Studies School.  As a result, most of my students were over 30 with the exception of an occasional Grad Student.  It was a stark contrast to my last three years teaching Seniors at Towson University.   Students at that age (perhaps legally an adult, but years away from full neurological development) have different capabilities and a different response to challenging material.   Sal touched on the challenges of scaling a fairly structured K-12 online curriculum up to the requirements for adult learners. One of the most interesting points Sal Kahn made had to do with knowledge gaps that persist and grow, based on the structure of the classroom.  For example, a student takes a test and gets a “C”, missing a number of the questions.  The next day typically does not include a review of the material to remediate, but the introduction of new and different material.  As a result, that knowledge gap is not filled, and any additional knowledge that builds on the unknown material is without that critical context.  The result is a broadening and meandering knowledge gap that can impact a student throughout their career. Kimo Kippen is the CLO (Chief Learning Officer) at Hilton Worldwide.  I was really struck with the experience he gained working though his career from busboy to chef and finally into leadership.  Even if you didn’t relate to his topic, watching him speak is a Masterclass in presentation due to his unique style.  One point that he regularly touched on, is simply using the available resources to create the “biggest lift across the widest audience”.  He stressed the importance of a thorough analysis, competent design and implementation and a thorough evaluation to measure success.  My favorite line was “People are either moving towards joy or away from fear.”  An important takeaway when you have to motivate a team or lead them through change.

A Growing Appreciation for the Role of Visual Design

I was pleasantly surprised to see this, but there were a couple of sessions on the topic.  Kellogg put together an excellent demonstration of how effectiveness of learning materials was improved by usable design and foundation level design principles. Think CRAP design patterns: Contrast – Visual contrast improves readability, and reduces required effort Repetition – Humans like patterns, we just do Alignment – Like patterns, structure and gridding improve credibility Proximity – Related items are close together, unrelated items are separated by white space Choosing colors purposefully.  Chunking and grouping content in ways that improve legibility and content uptake. There were a number of audience members who commented that they could not get support from leadership for the effort and cost needed to “Make it Pretty”.  That’s unfortunate and terribly short sighted, because that investment in design can make a huge difference in improving the efficiency of the knowledge transfer and that translates into dollars/time saved. Just some initial impressions,  and there will be more to come on Learning 2015, but for now, this hits the highlights…